Xbox One- The One Stop Entertainment System

Microsoft’s new direction is clear. Xbox is no longer a gaming console power-house. The Xbox is an all-in-one exclusive entertainment system. The system overall is powerful, intuitive, and simplistic. It has a sleek design that will fit nicely with all your other boxes stored underneath your television. The controller is very much the same with slight changes for the better. Kinect 2 is a major overhaul in hardware and its abilities. Technically on par with the PlayStation 4, it comes down to what the consumer wants; do you want gaming or entertainment? Here is the run down for Microsoft’s next Xbox; the Xbox One.

There were roughly the same amount of technical specifications discussed for the Xbox One as the PlayStation 4. Below are both systems insides laid out for comparison- 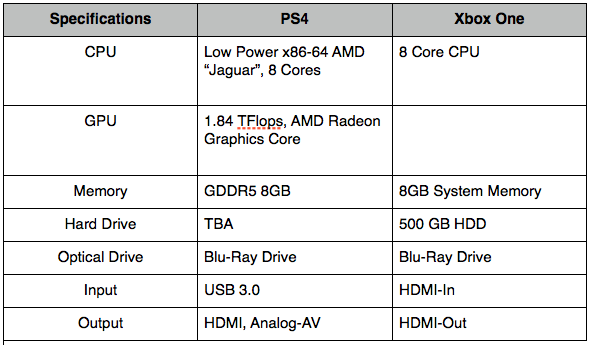 As far as the insides go, both consoles are the same. Microsoft did go ahead and announce the hard drive size. Only a 500gb model was confirmed, which seems underwhelming for this market, considering games today range between 25 and 30 gigabytes. Here is a shot of the console apart, with a list of the features-

The console itself is not all the specifications revealed, as the Kinect 2 is a fundamental part of the Xbox One experience. Compared to the PlayStation 4 Eye, the Kinect 2 is less powerful, as far as video capture. The PlayStation 4 Eye will shoot video in 1080p at 60fps, while the Kinect 2 only shoots 1080p at 30fps. Those 30 frames per second may be significant in regards to video, but the Kinect 2 super powerful in the area of audio and microphone pick-up. The Kinect 2 will recognize users voices and instantly log them into the appropriate Xbox account, loaded with all their specialized content. It was all fast and seamless. The Kinect 2 is “binding the experience” for Xbox One. It also is required to be plugged in for the Xbox One for the console to function. Here is the Kinect 2 broken down, with listed features from Microsoft-

The controller is not much different than the Xbox 360 controller. The only changes seem to be all positive ones. The directional pad has been improved for more precision, a common complaint among the Xbox community. They finally have ditched the battery packs, and have integrated them into the controller. Here is the controller broken down with a list of features-

The Xbox One is named because it is all your entertainment in one smooth, full featured experience tailored to you. The Xbox One experience is “Simple. Instant. Complete.”

It is no longer a gaming system with entertainment features, but an entertainment system. Microsoft has always wanted to take over your living room and with the Xbox One they have. Through Kinect 2 and the ability for users to plug in their cable boxes directly into the Xbox One, people can now have “a relationship with their television.” TV channels and shows are now “immersive and personalized” to the user. Changing between games, channels, and movies is instant, like changing a channel. The speed is rather impressive. To fully integrate user experience and social interaction, Microsoft has added multitasking to the Xbox, which they call Snapping. Snapping opens a small bar on the right hand side that allows you to use apps, such as Internet Explorer and Skype. The Snap feature is cool and helps accomplishes Microsoft’s goal of total living room domination.

For a next-generation gaming console reveal, the amount of video games was lacking. Microsoft showed off two exclusives, EA Sports, and ended with Call of Duty: Ghosts. Those exclusives were Forza Motor Sports 5, and a new IP, Quantum Break. The sports were Madden, Fifa, UFC, and NBA. Infinity Ward boasted a new engine with some new features to revamp the Call of Duty franchise. And that was it. Microsoft came out and said “We have 15 exclusives in development for the Xbox One, 8 of which are brand-new IPs that you will only find on Xbox One.” Hopefully most of those will be shown at E3 in two weeks. EA Sports showed off it’s new engine; Ignite. The engine will have “Human Intelligence. Living Worlds. True Player Motion.”. It all looks rather impressive and seems to immerse the player into as real an experience as they could get.

Graphically the games are gorgeous. Forza 5 is stunning. The sound of jaws dropping could be heard over the internet.

Infinity Ward also showed of the new Call of Duty engine. It looks pretty and will add new features to gameplay, such as dynamic maps, customizable characters, and dogs. No direct gameplay footage was shown though, most likely being saved for E3. The Xbox One is definitely powerful, there is no denying that. It seems gamers have to wait and see what Microsoft has in store at E3. As far as the “always online” issue, Microsoft did not come out and make a definitive statement on whether or not that was true. They did, however, say that the same Xbox Live accounts will be used, meaning that your Gamertags will carry over. That also mean that Xbox Live will still cost money. Again, hopefully the question of “always online” will be answered in the coming weeks.

Overall, the #XboxReveal was a let down. Huge focus went toward the entertainment aspect of the Xbox One. I, personally, walked away feeling like Microsoft walked away saying “Please be excited for E3!” just like Square Enix did at the PlayStation 4 event. It is a common feeling between gamers that Xbox has moved entirely from a gamer console to an entertainment unit. We all will have to see what Xbox One will do for gamers at E3 in just 2 weeks. What do you think about the Xbox One? Is this the right direction for Microsoft to go? Is it made for gamers? Or the common consumer? Let me know in the comments below.

One thought on “Xbox One- The One Stop Entertainment System”