With The Last of Us Part II finally released, I decided to make more charts. I did a few within Chasing the Stick: The History of Naughty Dog during the PS4 Era and also did one about the time between announcement and release. Now with the highly anticipated sequel’s reviews published, I thought now would be a great time to look at the studio’s Metacritic* scores since making games for PlayStation.

*The Last of Us Part II’s score was taken on June 17, 2020. This may change since the game is newly released * 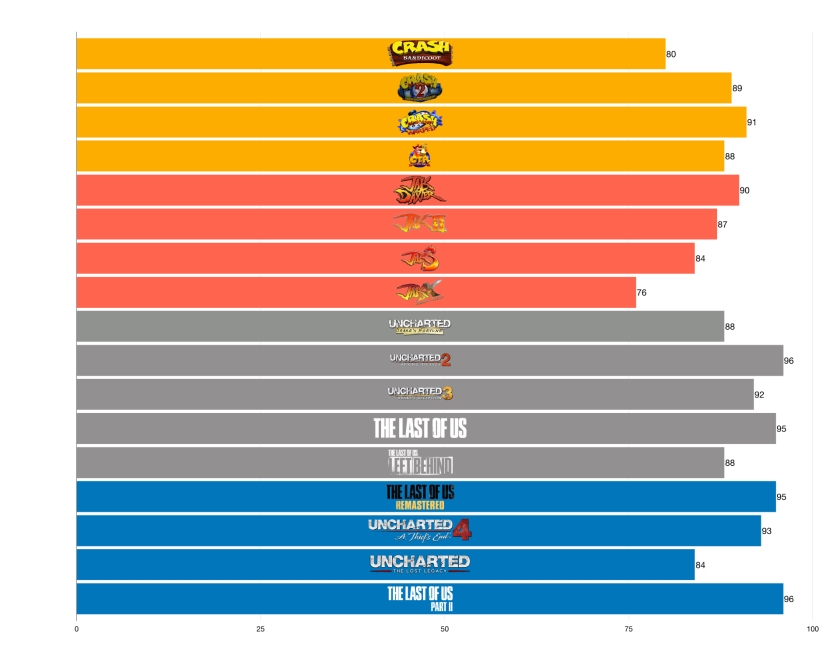 I colored the charted by console generation then placed the pertinent game logo on each bar. The lowest score is 76 with Jak X: Combat Racing, which happens to be the first game at Naughty Dog that current Vice President Neil Druckmann worked on before going onto Uncharted. They have two titles tied for the highest score of 96; both Uncharted 2: Among Thieves and The Last of Us Part II.

Now that I’ve actually beaten The Last of Us Part II, if I scored reviews, I’d agree with the 10/10 reviews. I haven’t read or watched any yet: I wanted to keep my head clean and clear so I can come up with my own take as I write my own review.