I thought it’d be interesting to explore the length of time between announcement and release for Naughty Dog’s games that I cover in Chasing the Stick. Then I thought why not include all the PS3 generation titles. Then I just decided to do every Naughty Dog PlayStation title. There is quite the range… 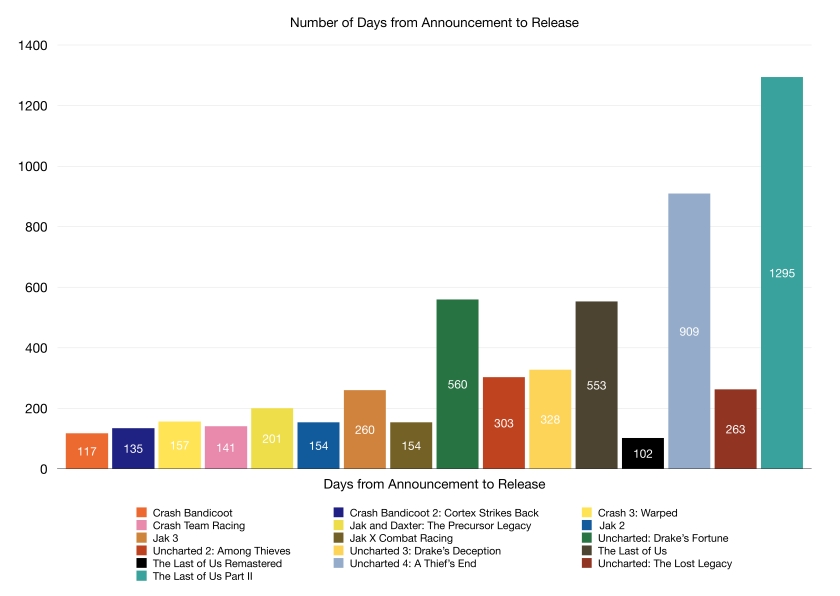 Some factors that played into how I came to these numbers:

From the PS1 generation through the PS2 generation, Naughty Dog was consistent at shorter turnarounds post-announcement. It wouldn’t be until the PS3 with Uncharted: Drake’s Fortune that the time to release would more than double. The choice to completely recreate their game engine for the PS3 alongside the learning curve of the hardware itself obviously lent itself to this increase. Naughty Dog was doing something they had never attempted before.

Uncharted 2: Among Thieves and Uncharted 3: Drake’s Deception have much shorter turnarounds, presumably due to fitting into a groove, having an engine in place, and a focus on where to take the game instead of trying to actually build the game. Looking at Uncharted 3 next to The Last of Us can give us a rough idea of overall development time though. Both games began their development at the same time since the studio split into two teams after Uncharted 2. New IP on the PS3 took an extraordinary amount of time compared to PS1 and PS2 development.

The sudden drop in time is The Last of Us Remastered for the PS4. Naughty Dog used this as a project to port their engine over to the PS4 from the PS3, instead of recreating an engine just for the PS4. This project was announced not long before release, which gives it the lowest date range out of all Naughty Dog’s titles.

The PS4 was a generation where Naughty Dog was completely transparent about what they were working on. They may not have kept fans up-to-date regularly, but there was never a question of what game the studio was working on. Due to this transparency, the range in days once again nearly doubled. Uncharted 4: A Thief’s End was riddled with challenges during development. While not reinventing the Uncharted franchise, the team did have to beef up their engine and create entirely new elements, assets, and mechanics. This was no ordinary sequel like Uncharted 2 and Uncharted 3 were.

On the flip side, Uncharted: The Lost Legacy was like Uncharted 2 & Uncharted 3 in the sense that the elements, assets, and mechanics were mostly there. This allowed the team to create a game in nearly one third of the time.

This exploration of development didn’t make it into Chasing the Stick—I just thought of it this morning. But I thought it’d be a fun thing to dig into before I publish my full history this Friday, June 5. I go over Naughty Dog’s entire history from 2013 to today, talking about their developmental timelines, work place practices, and leadership changes while sprinkling in my own editorial thoughts and comments. I am stoked to share it all with you very soon.

For the record, from announcement to publication, Chasing the Stick will be 74 days.

A couple of months ago at the end of March 2020, I announced this new project called Chasing the Stick. It would be the definitive history of Naughty Dog and their time working on the PlayStation 4. Covering the years 2013-2020, I have researched, analyzed, and critiqued the catalog that Naughty Dog has developed within one console generation. My transcription skills have gotten pretty good, if I do say so myself.

The end of the project is in sight. I plan to click the publish button on June 5, 2020. I chose that date for two reasons: It happens to be two weeks before the release of The Last of Us Part II and it also happens to be my birthday.

Chasing the Stick has turned into more than a lengthy editorial for my website. I have also turned it into an e-book and audiobook. It has been completely self-produced and published.

It will also be entirely free.

You will be able to download the e-book as a .epub or .mobi file. These can be added to your phone or Kindle reader quite easily. The audiobook will be available as a podcast through major podcast providers and as a direct download. I narrated the entire audiobook. It is the same experience no matter where you read (or listen) to Chasing the Stick. Everything will be available on MaxFrequency.net.

Chasing the Stick is part essay, part research, part history, part editorial, and part critical analysis. It is a celebration of my favorite video game developer. I’ve channeled all my excitement and energy for The Last of Us Part II into this story over the past four months. I cannot wait to share this all with you.

I’ve been writing the history of Naughty Dog during the PS4 era. It is far and away the largest editorial I have ever written. I’ve been working on it for a month now (two months if you count replaying the Uncharted series in my research) and still have another two to go, if The Last of Us Part II releases on time in May. I’ve wigged out my pal Logan by sharing the ever increasing word count.

It started out as “I should write a history on The Last of Us Part II.” Not an entirely foreign format for myself: I wrote a history on The Legend of Zelda: Breath of the Wild and one for Super Smash Bros. before Ultimate released. I love chronicling and researching games. I’ve been doing it since I made Power Points to convince my parents I was old enough to play Zelda and Pokémon.

My curiosity swelled my ambition. So it has turned into a history, analysis, and commentary on my all-time favorite game studio and their development during the years 2013-2020. I can’t wait to share it with you around the time The Last of Us Part II releases. Thanks.